Even though it was fairly overcast this morning, I wanted to go back to the RV Trail this morning to see if there were anything new to report - the forecast is for rain starting late this morning through Wednesday - it just started about an hour ago, and is really coming down now. For my St. Louis birding friends - thanks for sending the rain our way - we could use a little.

I decided to take the same route as yesterday, because yesterday's hike was good for some new species for this year. I parked on Glenthorne Loop, and did a quick check of the Yellow Bird Thicket (YBT) just on the other side of the first wooden bridge and just before the bog area. For those of you who do not know (or have forgotten) what I mean by YBT - this is a name I gave to the large thicket just before the bog area - the first year I started birding on the RV Trail, there was at least one yellow bird in that thicket every time I was there - White-eyed Vireos, Common Yellowthroats, Yellow-breasted Chats, American Goldfinches, Yellow Warblers, etc. YBT is also a great place to see Mockingbirds, various species of sparrows, Catbirds, Carolina Wrens, small woodpeckers, Cardinals, and more. The Wilson's Warbler we saw in May 2009 was in some wild grapevines next to YBT.

Anyway, this morning there was a male Indigo Bunting sitting on top on the tree in the middle of YBT, and a female American Redstart was down in the YBT brush. I heard a very loud Bobwhite, so it was either in YBT or in the tall grasses next to it.

I then went back over the wooden bridge and headed down the mowed path along Reids Creek. There were a lot of adult and juvenile Field Sparrows, Goldfinches, and Indigo Buntings. The Eastern Towhee was singing again. Also saw a Blue Grosbeak there. As I approached the area where I saw the warblers yesterday morning, I saw more Blue-gray Gnatcatchers. A Yellow-breast Chat was in the same area as before. I heard lots of warblers, and saw lots of birds with yellow markings flying around, but they were too quick for me to ID all of them. I did see another female and a male American Redstart, and then a female Orchard Oriole - first one of the year on the trail for me - unusual, as I saw Orchard Orioles all the time on the trail during the past few years. I did not see the male Common Yellowthroat, but think that I heard it. When I went back to the YBT, there was a juvenile male Indigo Bunting. 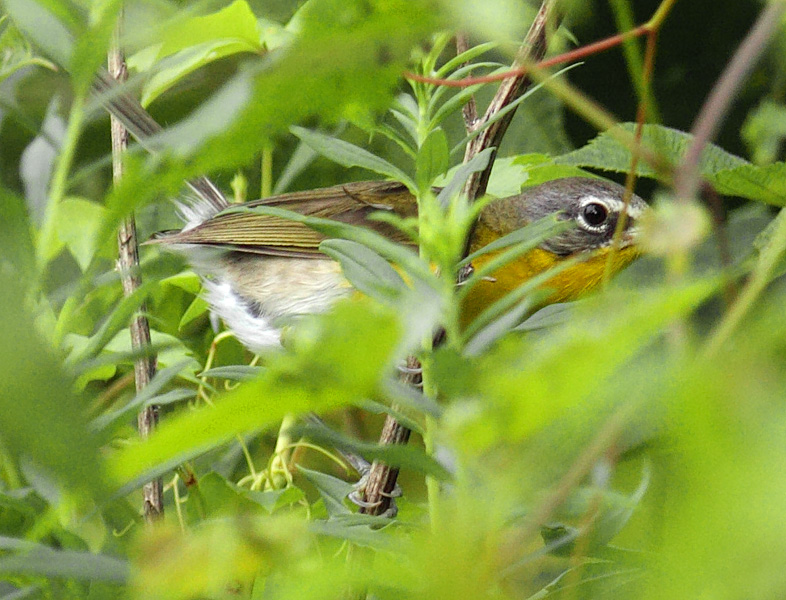