The temperatures have been twenty degrees below seasonal averages here so far this week. Yesterday, it was in the mid-20s with strong winds, and I did a little birding down at the small pine forest at the end of my street, and checked the lake and ponds for migrating waterfowl. The rest of the day my birding was limited to seeing a few more species around my house, but I managed to log 26 species for the day. This morning it was even colder - low 20s - but there were occasional calm winds between some fairly strong gusts. Many of the birds that had been hunkered down for the previous two days were out looking for food, and I added another five species to yesterday's list. I had hoped to log a two day total of 30 or more species out of the 50 species that I have seen here in Stoney Creek since the first of November. There have been unconfirmed reports of at least 3 more species.

Before I post a few photos from yesterday and today, there are a couple of photos from Sunday (12/5/10) and Monday (12/6/10) that I took here in Stoney Creek. On Sunday I wasn't doing any birding, but a Red-tailed Hawk landed in a tree in my backyard. This RT Hawk had one of the buffiest breasts I have ever seen on a red-tailed. On Monday, after returning from my hike on the Rockfish Valley Trail, I read some posts about Tundra Swans being seen in Charlottesville, and I went out late in the afternoon to see if any were on Lake Monocan - no swans, but a good photo of some Canada Geese heading toward the setting sun.

I started off this morning at Sawmill Creek pond # 3, and a Great Blue Heron was hiding in the brush at the far end of the pond. There was a good sized flock of Canada Gese there, and a male and female Hooded Merganser. When I looked at my first photo of this morning on my computer, I saw a male Wood Duck hiding as well. When I walked accross the dam to Lake Monocan, another Great Blue heron was fishing there.

I hiked from Lake Monocan to the Allen Creek Nature Preserve, but once inside the preserve, the frozen remnants from last Friday's snow cracked under the leaves on the paths with each step, and the wooden boardwalk creaked like an old man's bones, so I headed to other areas here in Stoney Creek. I saw a fair number of birds this morning. The following photos were taken yesterday and today (12/7-8/2010).

I photographed a leucistic Mourning Dove at my bird feeder yesterday afternoon. I wonder if it is the same one from last winter with fewer leucisitic feathers? 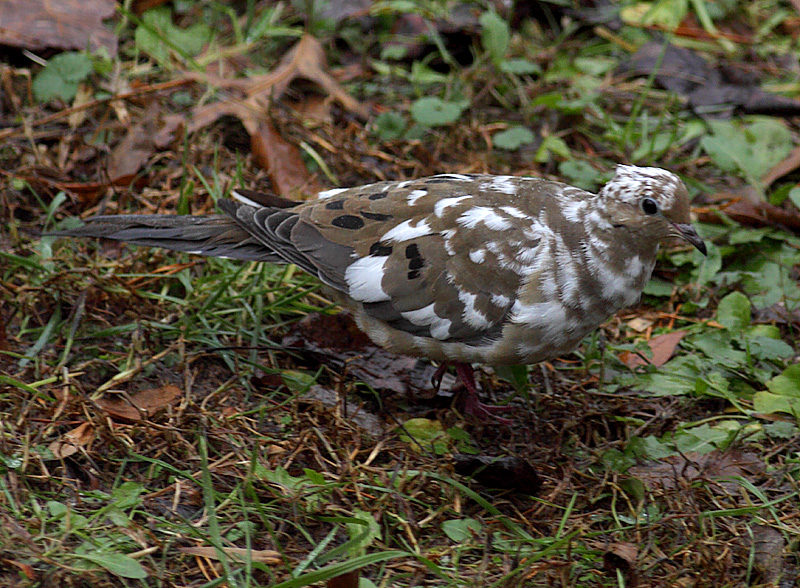 The following is my list of 50 species of birds that I have seen here in Stoney Creek since November 1, 2010. The ones in italics were not on my list from yesterday and today.