I have been investigating a rural area between Bishops Stortford and Harlow for the past decade. Field walkers and metal detectorists have reported finding Celtic, Roman, Anglo-Saxon, and medieval metal and pottery artefacts in plough soil where the earth may be turned as deep as one foot. Extensive use of fertilizers, pesticides, and herbicides is rapidly destroying base metal objects, and seasonal ploughing breaks pottery shards into ever-smaller pieces. Most of the damage has occurred primarily in the last 50 years, and expediting the characterization of this area is critical to developing a better understanding of the archaeological landscape before many of the artefacts have been completely destroyed.

I used a 1:25,000 British Ordnance Survey map sheet to record initial reports of artefact finds, but no archaeological patterns were evident. A few years ago, colour aerial imagery was flown over the site and digitised at 2-metre resolution. Investigation of the colour imagery showed ancient and medieval crop mark patterns in vegetation and soil variations in bare fields.

Roman artefacts, especially pottery shards, bronze coins, and lead loom weights, have been found in numerous locations in this area. Roman finds have been made at almost every location where Celtic artefacts have been found, suggesting Roman development on previously held Celtic sites. The Roman finds tend to be along fairly straight lines, which is consistent with Roman roads built in England. Small Roman bronze coinage was often found along ridge lines of the rolling terrain, suggesting that troop outposts might have been positioned there for defensive purposes, with artefacts associated with more urban areas being found at lower elevations near water sources, suggesting possible camp sites or villages.

During the past two years I have had access to IKONOS 4-metre resolution and Quickbird 2.4-metre resolution multispectral satellite imagery and 2.5-metre resolution InterMap aerial Synthetic Aperture Radar imagery. The new imagery expanded the area of investigation from just north of St. Albans (Roman Verulamium) eastward toward Chelmsford (Caesaromagus).

In addition to crop marks resulting from underground building foundations and deposits of organic materials in plough soil areas, special processing of multispectral and Synthetic Aperture Radar imagery highlighted previously undiscovered linear patterns in the imagery indicative of Roman roads. Figure 1 shows a portion of the Quickbird image where a 5-kilometre linear feature is clearly visible from just north of Sawbridgeworth to Widford. This linear feature continues another 5-kilometres to the west of Widford. I found approximately 30 different linear segments in the processed imagery that could be Roman roads.

I mosaicked all the imagery and combined it with the 2001 Ordnance Survey map of Roman Britain. Superimposition of the English Heritage digital files of known and suspected Roman roads shows correlations with some of the linear features found in the imagery; however, many of the linear features found in the imagery, and suspected Roman roads determined by artefact finds, are unreported in the English Heritage files. Some small offsets of the road vectors are apparent between the various data sources as a result of independent geo-registration and scale variations in the source data. Figure 2 shows the composite map, image mosaic, and Roman roads. 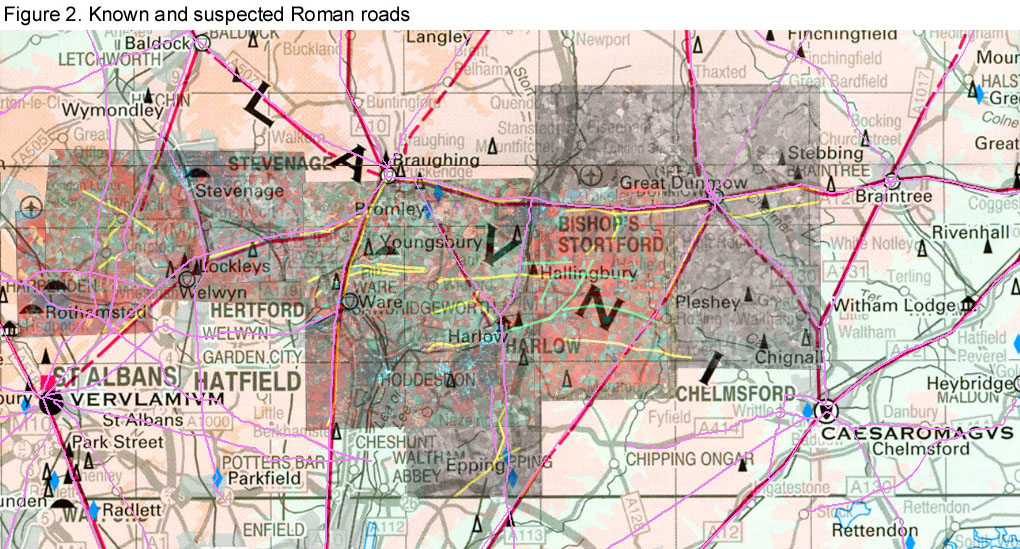 
The linear image feature leading toward Sawbridgeworth ties directly into a proposed Roman road ending at Hallingbury that is based on a line of Roman artefact finds in the plough soil. In addition, a line that appears to be a continuation of a road segment extending westward from Caesaromagus is both visible in the imagery and was independently predicted from Roman artefact finds. This road appears to lead to Harlow. Many of the known, isolated Roman sites in the area appear to be linked together by a network of Roman roads discovered in the imagery or determined by artefact finds.

The combination of surface-derived information with features observable in new imagery sources provides valuable insight into the landscape of Roman Britain. Mapping the ancient landscape in this expedited fashion is critical for preserving England’s heritage.