All my coins have been sold. 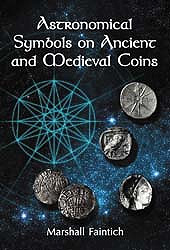 The depiction of deities and celestial events on coinage as propaganda devices to reflect divine right to a throne was used from the earliest ancient coins through the middle ages. The heavens were not only a mystical force to ancient and medieval peoples, but also the natural order of the universe.

The heavens declared what was to happen, and man only played out the story. Comets, eclipses, and close gatherings of planets explained the present and foretold the future. Everyone from the smallest child to the mightiest warrior could witness these celestial events, and rulers were quick to order their die engravers to capitalize on these omens.

Stars were signs of physical processes and events, such as weather and sickness. Eclipses and comets were associated with storms, floods, drought, and earthquakes. Comets, especially those with a long tail, were also taken to influence personal and general disasters, wars, changing kingdoms, and deaths of princes.

The following links will take you to an brief introduction on how various celestial bodies and events were depicted on ancient and medieval coins. In "Astronomical Symbols on Ancient and Medieval Coins," hundreds of examples are presented that demonstrate that the use of astronomical symbols on coins to depict actual celestial events was more common than a few isolated examples.